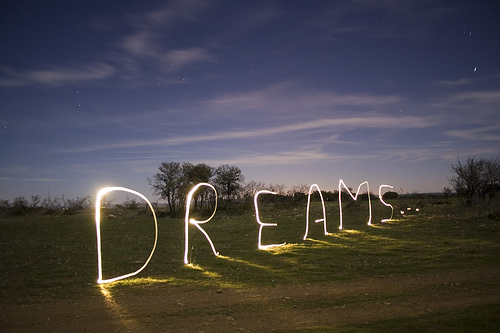 I’ve had this dream or a version of this dream for almost 10 years now. Sometimes I think I know what it means but most of the time I don’t. I had one version where I thought I would get them anymore but I still did. A short preface to these dream is that they take place at the first restaurant I worked at in the town where I spent most of my childhood years. I’ve had the dream at another restaurant I worked at when I moved to another state. Both were Steak & Seafood places and both have since gone out business but that is neither here nor there…or maybe it is. The dream this morning was this:

I am waiting tables at this restaurant I used to work at when I was ages 16-19. This time I was just starting and didn’t have a full section to wait on but was in training from what I could gather. I acted and felt like I was gone for some time from the restaurant but came back to work there. There were some of the same people working there especially in the kitchen. I had my first table and I was suppose to bring them to the particular table number but, being as I havn’t worked there for awhile I wasn’t sure where it was(this section wasn’t used much so I had to look at the seating plan but the rest of the place I knew the seating plan). By the time I found the table I knew the customers left the restaurant. Also in the dream that same room which wasn’t used much had a fair amount of people in there then it cut to a scene where all the people had to leave because there was a stack of 12 pack boxes of soda cans stacked and partially fallen over and leaking.

Now most of my dreams have the same type of stuff happening. I’m waiting tables and my food is burnt, cold, not ready, can’t find the table, customer’s left etc. Sometime I forget my PIN number to log into the POS(Point of Sale system) Nothing goes right. The one dream I had that I though was the resolution to them all was when they restaurant closed down and I was with my earthly dad. The only thing I can ascertain is “waiting” means waiting on the Lord and my frustration in the dream is being frustrated waiting for Him to do something in my life?? Anyone good as interpreting dreams? I’ve read books and most people say they same things like “this number means this” or “that means that” but I also know that dream interpretation is very different and what one thing means for one person can means a completely different thing for another. I would love the interpretation but I will wait in the question with Jesus and rest till it comes 🙂

I know all the Scriptures about dreams and what they are and what they are not. I would prefer visions as they are more literal in nature. Come to think of it I remember a prophetic word I received that I have and will have a relationship with the Lord even in my sleep. I’ve been accused of holding my hands up in worship during sleeping and talking/mumbling often too. Couple nights ago I had a dream in between the time of 6:40ish am when i woke up and fell back asleep and awoke to my alarm 7:00am.