I want to share some highlights from my trip to Nicaragua.

One of the only real “fears” I had about going was the 4 different plane trips and dealing with possible anxiety/panic attacks. Thankfully that was not an issue…being tall and on a plane was another thing. Nicaragua is considered one of, if not the safest country in Central America so that wasn’t a concern. Not once down there did I have a panic attack which I was thankful for too. It must have been time off of work that all the stress left.

Our team of 5 had a wonderful translator who was the son of the Pastor of the church down there. One of the woman of the team was also very astute with Spanish. We were able to stay at a hotel on a coffee plantation (D’Santos Hotel Boutique). Our daily activities were to meet with the children of the project during their lunch time, play group games, and hand out simple but well received gifts. After they left to go to their home we waited  some time and then left to meet them and their immediate family inside their

homes to present gifts provided by their sponsors from the U.S. After that we asked each family if they wanted prayer. Most prayers consists of health issues like arthritis, heart problems, a job or better job, and nicer house. The trip wasn’t geared necessarily toward evangelism but one woman became a new creation and one woman was still a pre-Christian. All in all those beautiful people enjoyed our visits and prayers and that someone actually cares enough for them and don’t think that they are just another notch on their evangelist belt. Personally I just wanted to hang out with them in their houses just to get to know who they are as people, their stories, passions, and what they feel God has for them.

The outright hospitality of them was very heartwarming. Most of them offered a seat and most only have the usual plastic yard chair as their main seating and me, being a man of girth, had to decline sitting on them. I need a hefty chair. What was so sweet is one of the grandmothers knew I couldn’t fit on their chair so she cleared off this end table, that was full of stuff, just so I could sit down in their house. It blessed me richly. Another house, where the father worked from home cooking, they had a fan, which was rare in the houses, and they turned it on for our team while we were there. Almost immediately upon entering the father handed us all a grape juice box and an artificial Chicharrón which we all declined but he was insistent so I took it and drank the juice box and ate the snack, both of which were tasty.

The only Scripture that was clear in my spirit during the trip was 2 Corinthians 4:7 which says,

But we have these treasures in earthen vessels, that the excellence of the power may be of God and not of us.

Treasures. In the Greek treasure is thēsauros which means: the place in which good and precious things are collected and laid up, a treasury. And that is exactly who they are. You see we are all created in the image and glory of God. No matter what tribe and language and people and nation a person is from (see Revelation 5:9). When we speak to the light, when we speak to the promise, when we live without an agenda the power of God has so much more room to move.

Like most people who go to impoverished countries and go back to the U.S. there was a measure of shock and awe. The kids were flabbergasted to get a bouncy ball one day, a SFX deflating balloon another day, and water balloon game another. But I also realize that our frame of reference is what we have seen and lived and not another person. So for them life is different and for us life is different. And neither should be overly projected onto the other. But the contrast is stark. No iPads, smart phones, or constant mental stimulation. While those in the U.S., generally speaking, are not content but always wanting more, those in Nicaragua that I met are also wanting more though content and smiling genuinely. In the midst of the monetary poverty, the riches of intelligence and entrepreneurship were present. In the midst of the these “shacks” there are stores which I patronized while there. Poverty is a state of mind not a state of financial superiority. 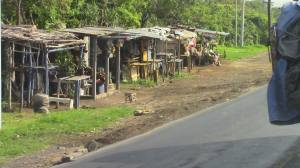 I saw people. Like you and me. People who go through the same internal struggles that we all go through. While looking at developing countries most people probably look upon the kids, family, housing, and poverty with pity. Or just feel sorry for them or not even give a lick. But then I see Jesus walking. Compassion comes to mind. It’s different from pity…very different. Compassion in Greek is splagchnizomai which means to be moved as to one’s bowels…gut wrenching comes to mind. In Hebrew it’s racham which means to love, love deeply, have mercy, be compassionate, have tender affection, have compassion.

Will I go back? If God specifically wants me to of course. If God asks, “Do you want to go again because it’s all good with Me,” then yes. If He doesn’t then no. I’ve shared the dream about a prophet guy naming three countries, Nicaragua being the only one I remember, so I will see what the other two are and go there if God shows me and provides the way. Personally I love traveling anywhere. I would travel to every country if possible but only God could perform such a thing because I don’t have money for that. I must confess that I’ve been envious for people my age, younger and older than me as well, and how they have traveled to so many different places and seen so many different things. Some go for pleasure and others go to preach, teach, and evangelize. I would love to be involved with that more so we will see. I’ve seen myself preaching and teaching but so many things seem in the way. I don’t know how others do it or get to do it. But that is for another blog maybe.

Thanks again for the prayers and support.

Follow As He is…so are we on WordPress.com
Join 1,843 other subscribers